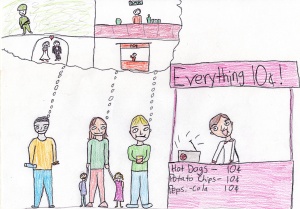 The street vendor on Literary Road sold three things: hot dogs, Lay’s potato chips and Pepsi-Cola. Four if you counted lively conversation, five if you had the privilege of listening to his radio when Indians games were on. The last two were free as long as you bought one of the first three.

In May of ’77 we stood by eating hot dogs while listening to Joe Tait call Dennis Eckersley’s no-hitter. “Dennis Eckersley gets the sign from Ray Fosse. Here comes the 1-2 pitch…STRIKE THREE! A NO-HITTER! DENNIS ECKERSLEY OF THE CLEVELAND INDIANS HAS JUST PITCHED A NO-HITTER!”

By the way, that was a night game. Nick kept unusual hours even when authorities said it was a no-no. He figured as long as the Indians were playing he may as well sell hot dogs.

There was nothing special about Nick’s hot dogs, and we all know what Lay’s potato chips and Pepsi taste like. People came because they liked to hear his stories. He was a tail gunner in World War II. He fought in the Battle of the Bulge. He read Pocket Books that publishers back home boxed up and sent to the soldiers on the front line. Stephen Crane’s The Red Badge of Courage was his favorite. But he always wondered why, with everything Crane wrote about the Civil War, men still want to fight with each other. What, do you think it will be different this time?

After the war, Nick came back home and worked as a bartender. He also delivered newspapers for the Cleveland Press and the Cleveland Plain Dealer. He repaired bicycles. He cleaned houses and apartments in Shaker Heights. He bought his hot dog cart. He didn’t work all these jobs at the same time, but it wasn’t unusual for him to be holding down three of them at once. He did marry, Estelle was her name, in 1948, but she was gone one day when he returned home from work. She left a note, said he worked too much. The Indians won the World Series that year. But his wife leaving after only being married for a couple of months put a damper on things.

By 1954 Nick had gotten over Estelle. The Indians, the best team in baseball that year, lost to Willie Mays and the New York Giants in the World Series. Nick was sad again, but he worked right through it. He was married to Literary Road and the people who never left him standing there with just his thoughts and his hot dog cart. Skinny people, fat people, rich people, poor people — all kinds of people! He was glad they were eating hot dogs and not hurling grenades.