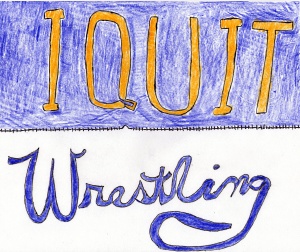 A 126 lb. wrestler for I-Quit High School said uncle just seconds before he would have been pinned at the Regional Championship in Belfast, Ohio yesterday. Teammates, coaches and fans are grappling with all sorts of emotions following the bizarre incident that resulted in a forfeit for both opponents.

“He had the left side of my face smashed to the floor…and my right arm twisted behind my back…making it hard for me to breathe!” said Will Givin of I-Quit High School. “I was anguishing…so I said uncle…which is what I used to say whenever big kids were holding me down when I was little. It was a gut reaction…I had no idea it would work!”

Not everyone was surprised by Will Givin’s unusual way of throwing in the towel. Samuel Isagoodsport of Jefferson High School, who was destroying Will Givin at the time, is taking the matter in stride. “When he said uncle I was like, let him go, man! It’s the rule…I mean it’s ingrained in our heads since the age of 3, maybe before. I couldn’t pin him after he said uncle. That’s just not cool, man!”

Saying uncle, the unwritten code for I give up, dates back to the Roman Empire. According to Wikipedia, when beset by a bully in ancient Rome, it was completely natural to say, “Patrue, mi Patruissimo,” which means “Uncle, my best uncle.” Whoever was on top of you would set you free. In other words, saying uncle to the person who is cutting off the circulation to your head is really surrendering to a person who is more worthy than you. Culturally, uncles in ancient Rome commanded a lot of respect. I guess there weren’t too many of them sitting around in their underwear and still living in their parents’ basement back then.

Both wrestlers feel good about their decision. Their coaches, on the other hand, intend to plead their cases to the Ohio Supreme Court. No one is more livid than longtime Jefferson High coach Earl Ironsides.  “I know darn well what good sportsmanship is. But those bastards cost us a trip to state!” cried Ironsides after he had a few hours to settle down. “You think the Germans and the Japanese will stop killing us if we say uncle? I was hired by the district to make men out of them boys!”

After informing Coach Ironsides that World War II ended 70 years ago, he put me in a chokehold that hurt so much I could barely whisper uncle! Then he called me a few choice words and left me on the floor with a crushed windpipe.